The history of the emblematic specialty of Bordeaux

Sometimes legends take precedence over history. The origin of this Bordeaux delicacy remains a mystery. Does the miraculous creation of the Canelé date back to 1519 in the religious community of the Annonciades convent, located behind St. Eulalie church ? … The Lord moves in mysterious ways ! 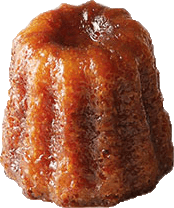 The story tells that it was in the 17th century in the heart of Bordeaux, in the Faubourg Saint-Seurin, that the first canauliers made the canaules, ancestors of Canelés. The recipe was simple: flour and egg yolks. They were so popular that there were 39 canauliers in 1785 !

It was not until the beginning of the 20th century that an inspired pastry chef gave it the typical Doric shape of the Grand Théâtre de Bordeaux columns! He created the 12-flute mould and improved the recipe by adding rum and vanilla.

The canaules then became the Canelés that we know today with their distinguishable brown colour obtained by the caramelisation effect of the dough in contact with the mould.

Since the 1980s, Canelé has become one of the specialties of gourmet Bordeaux and has found its place in good Bordeaux pastries.

World leader in the manufacture of Canelés de Bordeaux, a traditional local pastry. Quality being at the heart of our values, manufacturing process innovations have sustained the quality of our products which contain no preservatives, additives, coloring or GMOs.

history of the canelé

This website uses cookies to improve your browsing experience. Apart from these cookies, those classified as necessary are stored in your browser because they are essential to the functioning of basic website features. We also use third-party cookies that help us analyse and understand how you use this website. These cookies will only be stored in your browser with your consent. You also have the option to disable these cookies. However, disabling some of these cookies may affect your browsing experience.
Necessary Toujours activé
The necessary cookies are absolutely essential for the smooth operation of the website. This category includes only cookies that guarantee basic functionality and security features. These cookies do not store any personal information.
Enregistrer & accepter